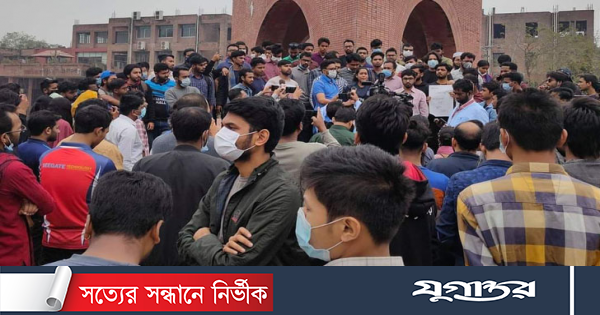 More than 300 students of Jahangirnagar University (JU) were injured in a local attack on Saturday morning.

At the end of the protest, students marched in front of the Vice Chancellor’s house.

They first met at the Central Shaheed Minar in Jabir around 11 a.m. on Saturday. There they gave a final statement to the administration asking for three points.

They called for the reopening of the dormitory hall around 2pm on Saturday, the construction of road gates in the area adjacent to the camp and the treatment of injured students.

A week ago, some students in Jabir were arguing with the locals over an argument that had erupted during a cricket match. On Friday evening after the incident, locals attacked the JU students’ riot.

Later, tensions between the two sides escalated and there were widespread clashes. More than 50 Jabir students were injured in the attack by locals. Eleven of them are receiving treatment at Savar Medical College in critical condition.