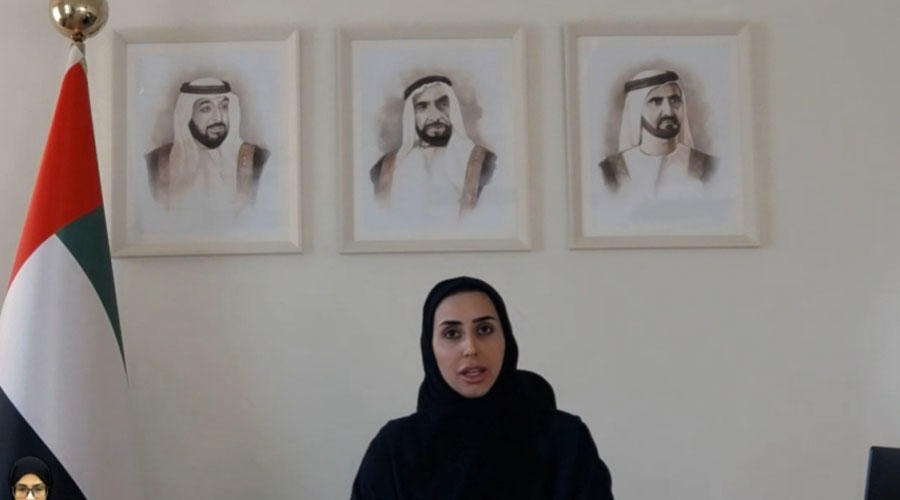 She is the President of the Women’s Association, the President of the Supreme Council on Motherhood and Childhood, and the President of the Emirates Family Development Foundation, under her generous patronage of the founding of the first virtual forum between the United Arab Emirates and Saudi Arabia. Chairperson Sheika Fatima Bint Mubarak inaugurated it on Sunday. Organized by the Safe Society »and the General Women’s Association and co-sponsored by the Saudi Family Affairs Council and the Saudi-Emirate Coordinating Council.
I am pleased to acknowledge her honorable participation in the inaugural address delivered by General Secretary of the Women’s Association Nura Khalifa Al Suwaidi on her behalf, and to thank the General Women’s Association of the United Arab Emirates, the Saudi Family Affairs Council in charge of Saudi Arabia, and myself. Organizing the first virtual forum between the two fraternal countries based on solid historical foundations and reflecting the depth of their relationship, which is strengthened by brotherhood, friendship and the unity of philosophy. We are confident that the joint initiatives between Saudi Arabia and the United Arab Emirates will always provide the best antecedents and solutions that will advance the process of sustainable social development in our beloved homeland.
Her Excellency added: “The Crown Prince of Abu Dhabi, under his leadership, is a valuable example of all the efforts of the Saudi-Emirate Coordinating Council, the model of unique integration and interdependence and cooperation, the Deputy Commander-in-Chief of the Armed Forces and a valuable example of cooperation. Salman Al Saud, Crown Prince, Deputy Prime Minister, Minister of Defense of Saudi Arabia.
She added, “Participants in this forum will present a summary of their ideas, works and scientific and professional experiences, and during the first two days of the virtual forum, we will see the best experiences and practices in both countries, sharing the quality and experience of living files. Taking and sharing experiences and quoting an initiative package, the happiness, prosperity and well-being of the two fraternal nations to be achieved. ”
“We pray to God to crown your sincere efforts to improve the family system, taking into account the support and concern of the two wise leaders of the two countries.”
Dr. Hala Al-Tuwajri, Secretary-General of the Saudi Family Affairs Council, confirmed that this forum reflects the strong coexistence and solidarity between Saudi and Emirati families, with the generous support of the leaders of the two countries, sharing experiences on family stability and improving family stability. . Introduction Her heartfelt thanks to the wise and wise leadership for their continued support of the Kingdom family.
She pointed out that the Family Affairs Council and the General Women’s Association share the goals they hope to achieve in a way that serves the family in both countries.
She said the Council aims to build a vibrant society that enjoys stability and well-being in line with the Kingdom’s vision for 2030, and to make a qualitative leap forward in the Kingdom’s social and development work through serious institutionalization that empowers and supports all sections of society to achieve the goals of sustainable development. . .
The General Secretary of the General Women’s Association, Noura Khalifa Al-Suwaidi, said that the establishment of the “Safe Family, Safe Society” forum was in line with the vision of the two rational leaders of Saudi Arabia and the United Arab Emirates to strengthen the foundations of family stability, maintaining its integrity and sustainability in the lives of its members. Is to create.
The General Women’s Association, in collaboration with His Excellency Shika Fatima and the Saudi Family Affairs Council and the Saudi-Emirate Coordinating Council, has built new horizons using technology and advanced technology so that family members can perform their roles and cope positively with current changes. Created ideas and initiatives. , Hoping that the activities of the forum will bear fruit, will make a real difference in ensuring family coexistence and strengthening the social structure.
Dr. Amal Al Habdan, a member of the Human Rights Commission, opened the first session with the theme “My Family is the Source of My Happiness” and “Lieutenant Colonel Muhammad Al Hosani, Head of the Prosecution Division of the Abu Dhabi Police General Commanding Center for Social Assistance” Spoke under the title. Muhammad Mabgur Al-Nashiri, General Manager of Family Counseling and Conflict Resolution at the Al-Mawada Association for Family Development, spoke on marital compatibility.
Hessa Thalak, Assistant Deputy Secretary for Social Development, Ministry of Community Development, opened the second panel discussion on “Making Family Culture and Making a Difference” with the participation of Siham Al-Suwei, Director and Foundation Director of the Support Center for Children and Family Counseling. Presented a worksheet on “Health”. Director of the Family Guidance Department at the Department of Family Development Centers, Mosa Al Shehi, spoke on managing family stress under the current circumstances.
On the second day, Ahmed Zulfar, Director General of the Community Development Authority, will open the third session as “Positive to Prevent Crisis and Problem Solving.” Vice-Chancellor of the College of Arts for Postgraduate Studies and Scientific Research and a member of the Women’s Committee of the Family Affairs Council on “Family and Duties Among Rights”. Fatima Al-Amari, Managing Director of Foster Children’s Visibility Centers, presented a worksheet on “After Divorce.”
Dr. Majeed Al-Isa, Executive Director of the National Family Safety Program, will open the fourth session of the “Family and Community Relations” session with a pamphlet on “Familyization and the Future of Foresight and the Safe Environment in the United Arab Emirates”. With the participation of Hanima Al Bahri, Director, Department of Care and Rehabilitation.
Dr. Abdul Salam Al-Wel, Assistant Professor, Department of Social Studies, King Saud University, spoke on the Deer family, opportunities and abilities. (WAM)