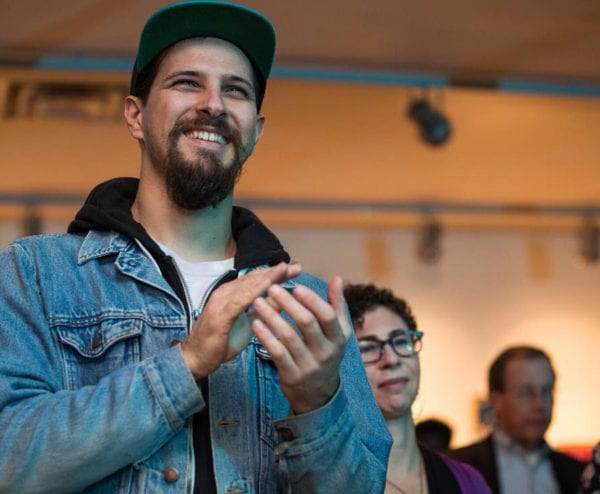 On the photo of the flyer show home, which dates back to 1997, the number has been obscured. But when it was originally published more than two decades ago, it was there in full, along with a telephone number.

And yes, that would be Ryan Dorsey, councilor for the 3rd district. The four bands scheduled to play that July night performed in the basement of his parents' house. Before the flooding of invitations to events in our social media feeds, flyers like this and word of mouth were like information about shows and independently organized shows spread.

There is a little more in this bite of local musical tradition. This obscure moment in history has been re-presented in the present through an Animal Group post on Instagram.

"Still in high school," wrote one of the band's members, Josh Dibb. "It was probably the first time that Dave and Noah and I played a show together … I had written music with Noah for a few years, and Dave and Brian had asked me to play keyboards in their Automine band. it was perhaps the first time those worlds mingled. "

There's something unique and wonderfully about Baltimore about a band that would have been successful domestically and internationally for its avant-pop music after cutting off their teeth in the basement of a guy who would eventually become a member of the City Council. This confluence of creativity, among other qualities, characterizes the hug of Baltimore for the unusual that still paints much of the music, art, cinema and theater that is being done on its borders.

It seemed worth exploring this alignment of the stars, so I called Dorsey yesterday to learn more about his history as a promoter of home shows.

Firstly, it is worth pointing out that it is not entirely a surprise: Dorsey has been in local bands, holds a degree in music composition at the Peabody Conservatory and has hosted the fundraising event More Creative Power with exhibits d & # 39 ; art and musical performances.

And, well, he mentioned this same leaflet in an interview with Bmore Art in 2015.

When I spoke to him, he still vividly recalled that he sat down to do the flyer with Emma, ​​The Superstation and The Idea Men typed in different characters when he received a phone call from someone he had never met asking to be put on the bill.

He had only hosted a concert before. Two hundred children came through his basement, some pausing to sit on the driveway or on the lawn to smoke cigarettes, for a lineup of 15 full-day bands, all for free. For the second, he was charging $ 2 to recover the money he had spent in supermarket soda.

The person at the other end of the phone said he heard about the show and asked if they could play.

Dorsey said he did not encounter any problems. He asked, "What's your band name?"

"We're not a band", Dorsey reminded the other person on the phone by saying, "We're just friends and we only play together".

Dorsey asked for something to put on the flyer, so they gave their own names. And this was enough.

He is still not sure which member has called him. (An attempt to reach Dibb, the only member who still lived in Baltimore, via e-mail was unsuccessful.)

"If I had met Josh, David or Noah, he spent a minute in a row," Dorsey said.

After that it was just another show in the Dorsey basement. But not because his parents were crazy about the noise or the flow of teenagers who crossed their home. In fact, they supported all of this.

"They could see it was the only thing I was really interested in," Dorsey said. They would have preferred to have him there instead of going out, he said, and so they supported the concerts. The only rule was drinking or drugs.

What initially inspired the shows led to their end: Ben Valis, another Baltimore teenager who brought bands to his mother's basement, a small shop on Harford Road called Hot Dog City, and a local American Legion store. Around this time, Valis managed to open a place on Belair Road called the small intestine, a space that in its short existence became a local underground musical landmark that included performances of important national acts such as Giovanna d'Arco, Songs : Ohia, Arabic on Radar and Les Savy Fav. (Tom Briehan from 2003 City Paper Valis profile is a required reading.)

There was also, Dorsey recalled, a woman in St. Timothy's Church in Dundalk who took note of all the young people pursuing a creative outlet and decided to help treat shows across the board. ;area.

Wherever something had been booked, 100 children would show up, coming from the city and points through Baltimore County, he said. Reflecting now, Dorsey is still able to list many of the bands: RhinoVirus, Oxes, Universal Order of Armageddon, Mr. Belvedere, to name a few: some of their members and what they are doing now. Many are still pursuing the arts, whether it be here or elsewhere.

"There was all this stuff going on," he said. "It was magical."

When Dorsey went to the Catholic University of Washington, D.C., no one had encountered experiences similar to his. It was then that he realized: "What the hell do I do at the Catholic university of D.C. I want to go back to Baltimore.It's something special in Baltimore."

Returning to the flyer, the photo that has made its way on Instagram has been taken from a mutual acquaintance in the house of Dorsey, where it is hung in its dining room. It is not there because of its significance in the history of Animal Collective, but because it is a memory of what Dorsey sees as a critical and informative moment in his life.

Booking those three shows and being part of that scene taught him hard work, collaboration, dimensional thinking and speed in his steps, Dorsey said.

Back in April, Dorsey said he went to Ottobar to see Chicago experimental rock band Dead Rider. Dibb, performing under his stage moniker Deakin, was the opening act.

Having met only briefly about 21 years ago, Dorsey decided to go up and introduce himself. The memory of their first meeting returned quickly. "I played that show in your parents' cellar in high school!"

Brandon Weigel is the editor-in-chief of Baltimore Fishbowl. A graduate of the University of Maryland, he was published on The Washington Post, The Sun, Baltimore Magazine, Urbanite, The Baltimore Business Journal, and others. Before joining Baltimore Fishbowl, he was editor of City Paper from 2012 to 2017. He can be reached at [email protected]