How to Get Into Mastodon

Maybe you’ve heard of the newish social network Mastodon, or maybe you haven’t, but between Facebook’s repeat mishandling of data and Twitter’s general toxicity, maybe you’re looking for a new way to keep in touch with your friends and professional networks! Here’s a quick guide on how to get started.

Mastodon is a social network similar to Twitter in format, where users post statuses that can be seen in a stream, and can follow each others’ updates. The default layout on the web is similar to Tweetdeck, in fact! The main difference is that Mastodon is a distributed system broken into instances that anyone can host.

Mastodon also has some nice extra features; posts can go up to 500 characters by default, rather than Twitter’s 280 (and some instances set their limit even higher). You can also control the privacy of specific tweets (only to who you’re following, or only to specific users) and set content warnings for your posts. Some instances also have even stricter codes of conduct and limitations on what content is allowed, if you don’t want to deal with spam or adult content.

Mastodon isn’t so different from other parts of the internet, but it has its own variations on a lot of social media terms:

Instances, and Picking Yours

The original Mastodon instance is mastodon.social, but you can search the whole list of instances at instances.social or on the Mastodon informational website. Instances are sometimes themed and have a particular culture to them; there are some targeted at artists, some for tech, some that are for posting selfies or birds only, some just for running mastodon bots.

You’ll probably be fine on a general instance such as mastodon.cloud if you don’t have a particular preference, since you can follow anyone on any Mastodon instance. Your instance matters for two things: your full username/URL (so if you want to be @[email protected], sign up on webdev.network), and who shows up in what’s called the “Local Timeline,” which is a stream of all posts on that instance. The “Federated Timeline” shows all posts across all instances, apart from any that your instance has blocked.

Before you sign up on any one instance, consider clicking around to look at what instances exist, whether they’re open for new signups (some instances have a user cap or are invite-only) and if you like their vibe and the content available in their public timeline! You don’t need to make friends with everyone in your instance, but it’s good to get a feel for the culture. It’s also good to look at their stats for how many users they have and how many statuses have been posted on that instance; depending on how you want to use Mastodon, you may prefer a smaller, quieter instance, or a larger and more talkative one.

Once you’ve picked an instance, sign up! If an instance is open for signups, you’ll usually find it in the left-hand sidebar on the front page.

Logged in, you’ll see a column for typing statuses, one for your timeline, one for your notifications, and one where you can open your local or federated timelines, or view your direct messages, favorites or lists.

Above the status box, you’ll see a search bar, and then above that a gear icon, which is where you can manage your account settings.

Edit Profile contains some controls for the look of your profile; you can edit your display name and bio, as well as add a profile image and header just like on Twitter. You can also choose to lock your account here, which will require followers to be approved by you, which is useful if you plan to make tweets private to followers. You can also enter up to 4 items of custom metadata for your profile, which you can use to display things like your website or pronouns. 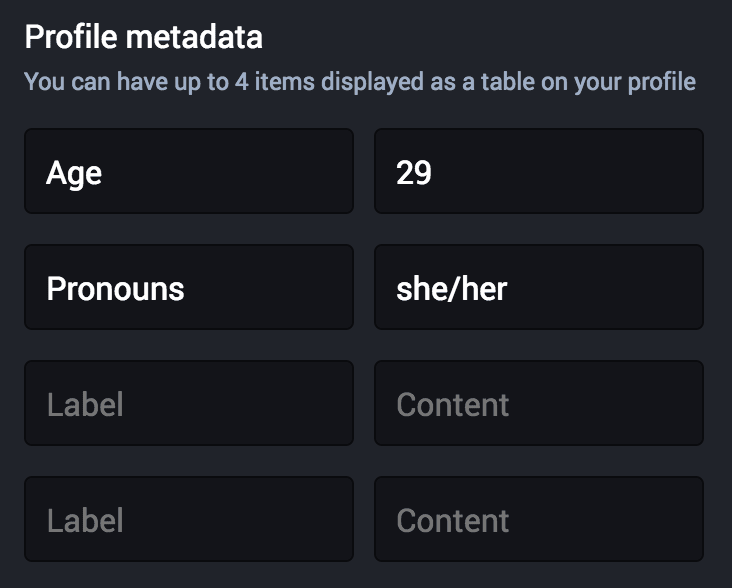 Preferences contains a number of settings for how you read and write on Mastodon, including selecting what language you’d like for the interface, and what languages to show in your timelines. This can be helpful for filtering out content you can’t read from the Local and Federated Timelines. Preferences also contains settings for hiding your posts from the Local/Federated timelines if you don’t want to be findable that way, and opt out of search engine indexing. You can also control what content to hide or display by default from here. 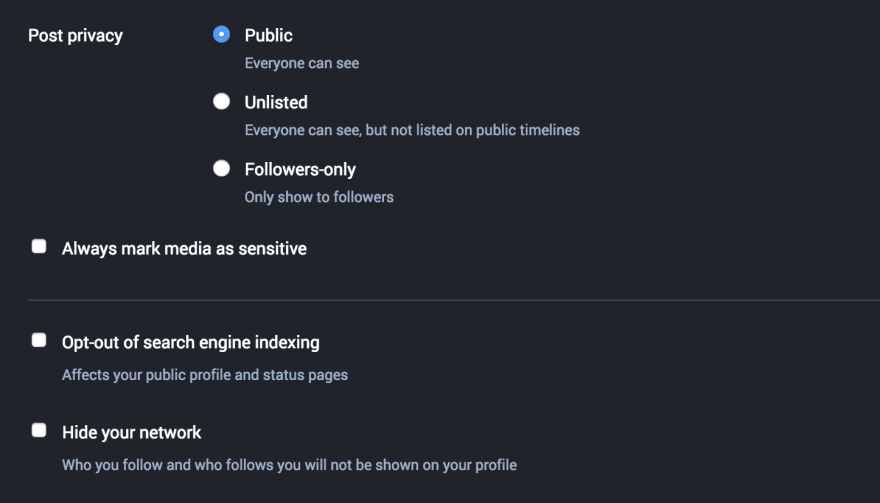 A lot of the other settings sections are pretty straightforward, though worth exploring since they give you some other useful privacy controls. Authorized followers in particular is useful if you’re a locked account; this is where you can set your list of who can see your posts.

You’ll also want to look into Filters, which is under Settings; it allows you to filter out certain keyword content from any or all of your timelines, which is great if there’s a topic in the news you’d prefer not to see or if all your friends are really into a TV show you’re not into.

It’s time to write your first toot if you haven’t already! You have up to 500 characters, unless your instance allows more. If you’d like to add images, click the icon of a camera. The globe icon allows you to adjust the privacy of your status; you can make any individual toot unlisted from public timelines, or post to your followers only. You can also just send a toot to specific users, like a direct message on Twitter. 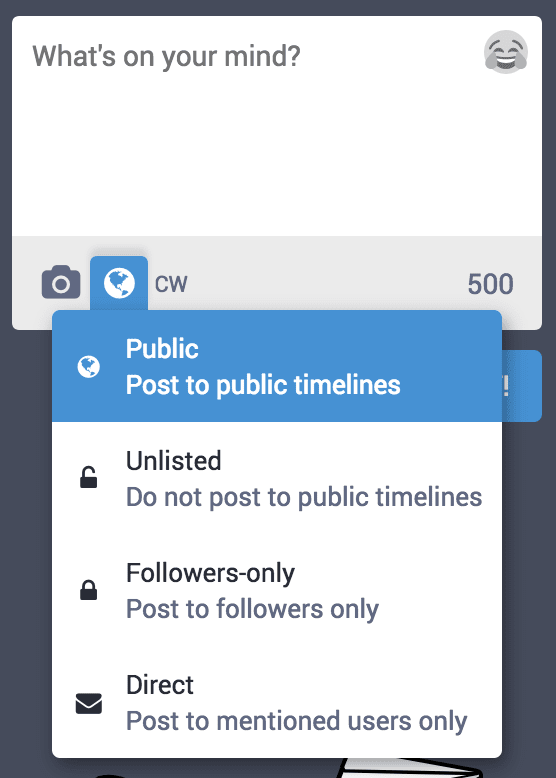 The other tool you have in writing toots on Mastodon is content warnings; you can manage them under the “CW” icon. If your toot contains sensitive content or a common phobia, you can label why you’re hiding your content with a warning, and then put the actual content underneath. Some Mastodon users also use this to tell jokes—they write the setup in the “warning” field and the punchline in the status box. 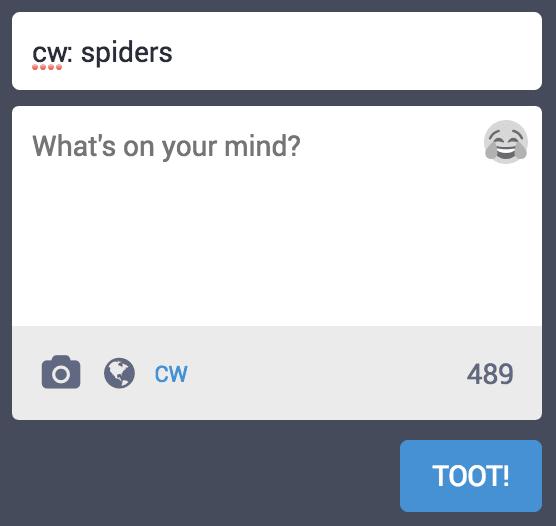 An example of posting a toot with a content warning

Then hit the Toot! button! That’s it, you’re live on Mastodon!

If you’re looking to see who you already know that’s on Mastodon, you can use Mastodon Bridge, which lets users connect their Twitter and Mastodon accounts so their followers on either platform can find their account on the other. You can also opt to add your information to the database so that people can look you up on Mastodon as well!

Apart from already knowing people, the primary way to find people to follow is looking at your Local and Federated timelines to see what people are posting and following folks who look interesting. Many people will also add hashtags of things they like to post about to their profile to make them easy to search for, if you’re looking for people into the same topics!

If you want to still post content for your followers on Twitter but start ramping up your Mastodon presence, you can log in with both your Twitter and Mastodon accounts on the Twitter-Mastodon Crossposter, which will automatically crosspost in either direction, with the option to include retweets/boosts, replies, mentions, etc.

If you want to switch to using a different account (even one on a different instance!), you can find a setting to redirect your account under Edit Profile in your settings.

Running Your Own Mastodon Instance

You might consider running your own Mastodon instance if you want really fine control over some instance-wide settings, if you want to fill a niche that isn’t already present, or if you want to have an instance that’s curated to a specific group of people, such as family or friends.

An easy way to run your own is to use masto.host, which will manage a Mastodon instance for you. You can also run one off of your own server, if you have one and want to control your hosting. The resources Mastodon requires generally are related to how many users the instance has, which is why many instances have user caps or are invite-only. If you’re interested, you can find more info about running your own instance here.

My ulterior motive in writing this is to get more folks on Mastodon so I can hang out with them! You can find me at [email protected]